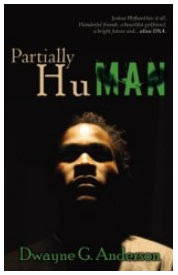 Why did you pick that name? I made up his middle name and last name, though the first name I chose had special meaning. A man named Joshua led the Israelites succeeding Moses, the man who delivered his people out of Egypt. Similar to Moses’ successor, Joshua of “Partially Human”, ultimately leads his people out of human ignorance and prejudice.

Who does he love? Why? Joshua doesn’t fall in love with Kimberly Derth until late in the book, though he does treat her special before he does realize his true feelings for her.

Does this person love him? The feelings Kimberly feels for Joshua are definitely mutual.

Where is he from? Los Angeles
Does his hometown affect his behavior, thoughts and attitude? His rejection from the citizens and their cruel treatment starting in the second part of the book destroys his esteem and spirit, still he has his friends to support him.

Did you write more than one story about him? No, one is often enough.

How would he describe you? He would say that I am a man who has been through much hardship, but is determined to succeed. He says I take after him quite well.

By the way, do you have a picture of him that you'd like to share? Nope, but I think that’s him on the cover page.

Post a comment for Dwayne for a chance to win a copy of Partially Human :)
Posted by Nikki Leigh at 7:22 PM

hi it's me Dwayne! I'll be available throughout the day to answer any questions you people may have or if you just want to comment. Remember, there will be a free book giveaway to one lucky commentor chosen at random at the end of the tour!

Visit my official website at http://www.geocities.com/andersondwayne/dwaynegand.html for more information about my published books or if you'd like to get your own copy. Just click on the book cover images. You can even get a sample chapter from Partially Human!

Ii would like to see a caring compassionate being lead humanity out of ignorance and prejudice even if he is only partially human! 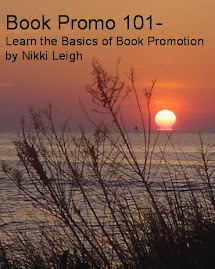